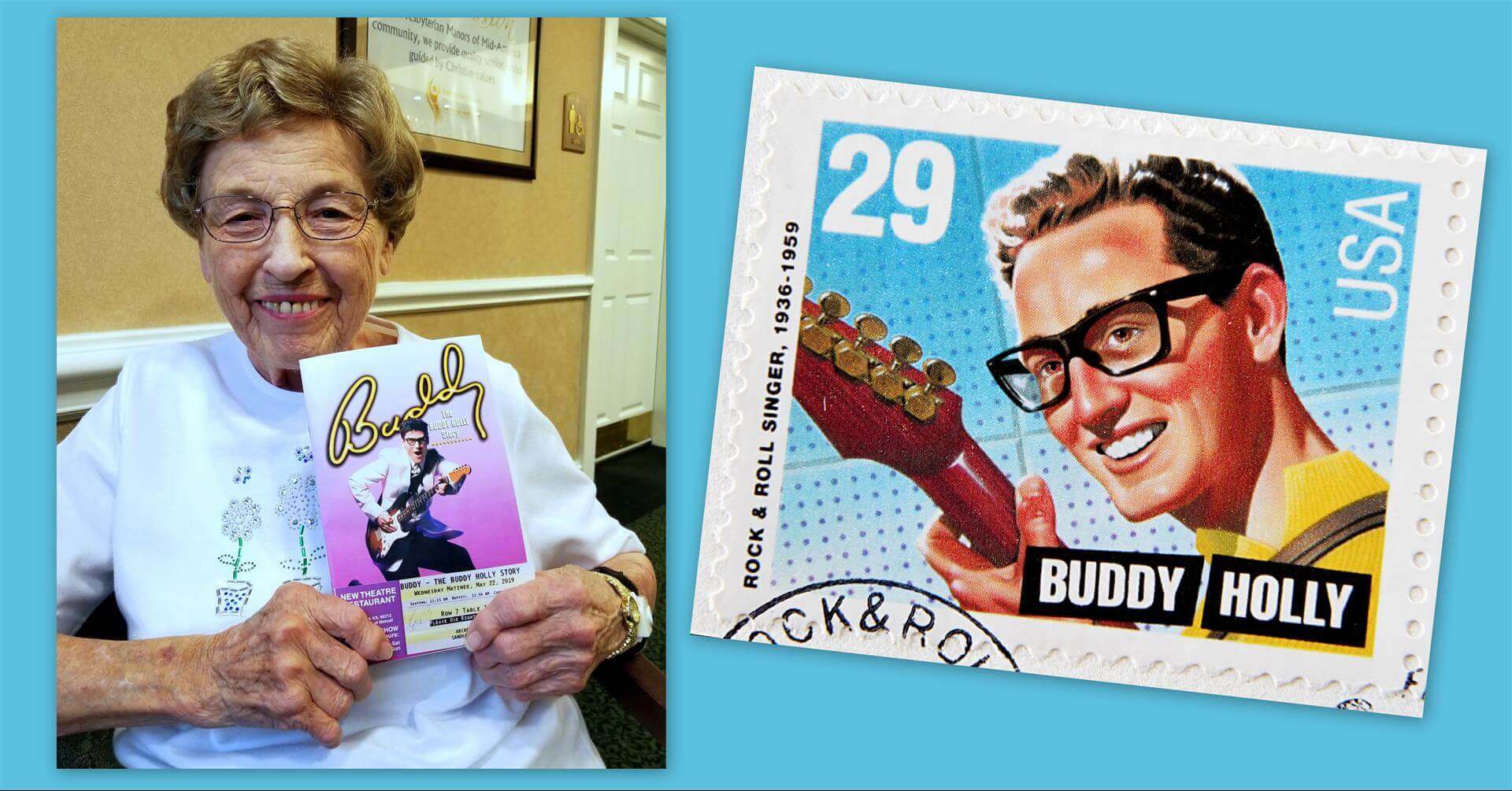 A Night to Remember

It’s a day that is forever imprinted on Berniece Egger’s mind and memories of it came flooding back recently during a show at the New Theater Restaurant in Overland Park.

On that day, Eggers, now an 86-year-old Aberdeen Village resident, was attending a big dance in Clear Lake, Iowa, with her husband, her sister and her sister’s husband. The couples often traveled 90 miles from their homes in Story County to spend the night dancing and listening to music in Clear Lake, but that night was even more special.

Popular musicians Buddy Holly, Ritchie Valens and "The Big Bopper" J. P. Richardson were the ones performing as part of their "Winter Dance Party" tour across the Midwest.

The two couples enjoyed the performances and a night of dancing and considered staying in Clear Lake at a cabin they owned by a lake. But it wasn’t going to happen that night.

“That night was going to be special, and we really wanted to go, but the weather was turning bad,” Berniece said.

The group decided to drive home, and as they traveled along the highway, they watched a small plane depart from the local airport carrying Holly, Valens and “The Big Bopper.” Berniece said many of the dance attendees warned Holly and the other musicians about traveling by plane in the wintry weather, but they didn’t listen.

As the group watched the plane depart, they shook their heads and thought, “Wished they had stayed instead of flying out in this storm.”

The next day they heard the news over the radio. All of the musicians were killed when the small plane crashed into a cornfield.

“My husband and I just sat there trying to make sense of it all,” Berniece said, “telling ourselves it just isn’t so … if they had only waited. We called my sister, and we were just numb and couldn’t move for the longest time. Everyone couldn’t believe it and the radio just kept playing all of their songs all day long. It took a couple of days before it really sank in that they were gone too soon.”

Aberdeen Village residents regularly attend shows at the New Theater Restaurant and were excited to see the musical “The Buddy Holly Story” there recently. The musical tells the story of Holly’s rise to fame and features his hit songs.

Berniece loved the show, but it brought back a lot of memories - both happy and sad.

“It was a great show,” Berniece said. “It made me remember that he was always doing good things for others and was funny. I am so glad I went to the show to see and hear all of the music that he did.”

“He was taken from us much too soon,” she said “His memory will always be with me and seeing the show felt like I was at that dance party once again. I loved it.”

Sandra Barnes, life enrichment director, said the group listened intently while Berniece told them the story of that night - the day the music died.

“We all loved hearing her tell of that fateful night so many years ago about a great entertainer that was taken from us to soon," Sandra said.

Posted on
June 17, 2019
by
Cindy PMMA
filled under
Residents
« Back to Blog