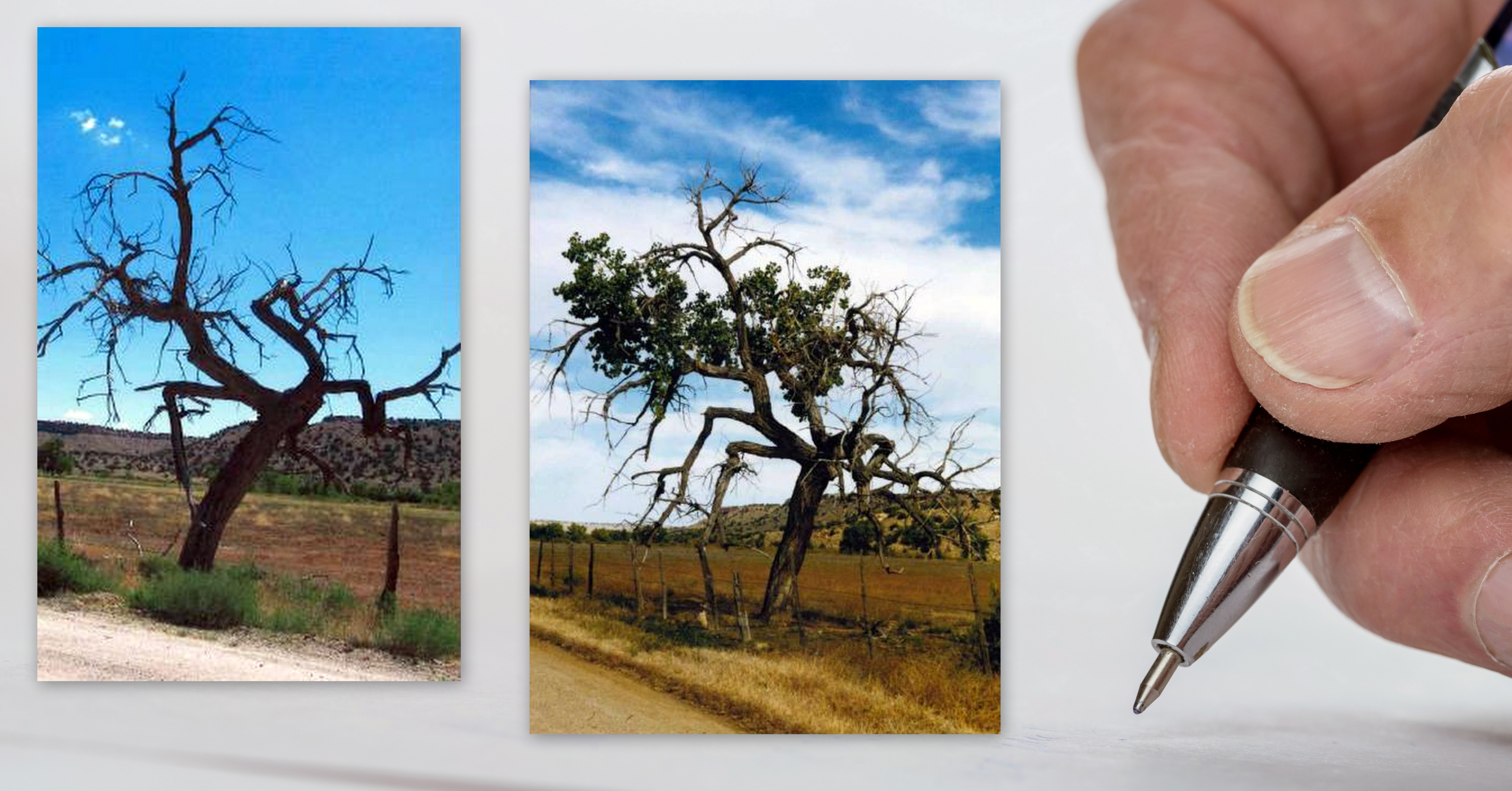 On a trip out to southeastern Colorado, on a dusty road miles from La Junta, an unusual tree caught Bill Walter’s eye.

“I saw this strange looking tree,” Bill said. “Most people wouldn’t notice it, but I stopped to take a photo. That was in 2002, and I didn’t see it again until July 2012. All its leaves were gone, and most of its branches. Something attracted me to it; I don’t know why.”

From that first chance encounter, Bill began crafting a poem to capture his thoughts about the forlorn tree:

O Weary Tree by the side of the road,
If only you could tell us what you are thinking
As your time here on this earth comes toward its end.
How long has it been, O Tree,
Since your beginning from a small little seed,
Since you first lifted your tiny limbs toward the sky?

Bill entered the photo and the poem in the first Art is Ageless competition held at Aberdeen Village.

In the years between that first encounter and now, Bill has entered the annual art contest many times, and he served as the head of the art committee for many years.

“It’s one of those things I got involved with in the very beginning,” Bill said. “I came in at an age where I could still do a lot of things, so I just got involved. Now my vision is almost gone, so I can’t do hardly any of those things. Up until last year, I exhibited something every year in Art is Ageless.”

Walter thought of his weary friend often during the years in between visits. His wife, AnnaBelle, passed away in 2009. When he returned to La Junta in 2012 to visit his nephew’s ranch, Walter made it a point to pay his friend another visit.

“I think the weird shape of the thing drew me in,” Bill said. “Some branches had broken off, or down. Others were going up, or out.”

O Weary Tree by the side of the road,
Ten years have passed since last I saw you,
Standing alone, a lonely watchman of the decades past.
My thoughts reached out to you from afar, old friend.
ere you still there? Were your feeble arms
Still stretching up and down and out to the side?

In the years since that first encounter, Bill has thought often of the tree, and wondered about the parallel tracks of the lives of both artist and subject:

I know what lies ahead for you, O Weary Tree.
Piece by piece, you will be torn apart.
Your resting place will be the soil around you.
Slowly, you become like the dust that is your bed.
No longer can I greet you or stop by to say hello;
My time is short, and the distance much too far.
Yet I will remember you as I have throughout these years;
You spoke to me in ways no one else could hear.
That voice is silent now. Goodbye, old friend.
Goodbye.

Posted on
February 5, 2021
by
filled under
Residents
Art
Art is Ageless
« Back to Blog